13 Oct Birds on the Breeze

Posted at 11:22h in Blog by Grant George Buffett 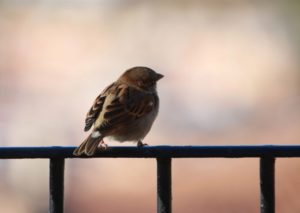 Last year, during the Fall lockdown, we bought a bird feeder to see if any birds would come to entertain us. After about six weeks, and more or less giving up hope that they would pay us a visit, one day, as if by surprise, some Old World sparrows discovered it and have been back regularly ever since. We’ve had to refill the feeder several times now, but it has indeed been entertainment for the whole family.

With the kids, we have been trying to come up with names for these sparrows. At first glance they all look alike, but with the help of a little bird book we have been able to partly identify individual birds. It’s easy to tell males and females apart, as the males have striking dark black, white, and brown colours, whilst the females are mostly brown. Our seven-year-old likes to call one of the males ‘chubby’ because he looks rather stout, and maybe he puffs his feathers up a bit. He seems like the alpha male. There is also Thinny, Mindy, and Brownie. They’re all brown, of course, but that’s a seven-year-old for you.

One day it was rather windy, and the feeder was flipping around like some sort of quasi-random  3D pendulum, as if that description makes any sense at all. The sparrows were out there on the railing of the balcony and the pruned branches of the grape vine that snakes its way from the garden below, but they weren’t able to grasp on to the feeder.

So we had this genius idea to grab a couple of bungee cords and tie them to the swinging feeder to the railing below, reducing its wobbling considerably. After I did that, the birds eventually came back, about 25 minutes later. After scattering as I emerged onto the balcony, they took refuge nearby and seemed to be watching us from a distance, fumbling with the bungee cords and feeder, my body bracing into the oncoming wind trying to find the optimal tightness to eliminate the wobble.

These sparrows all live nearby year-round, by the way, some with nests in cracks in our house and the 100-year rock wall of a neighbour’s house, which, while still standing strong, has nice little caves carved in it from years of wind and rain erosion, in addition to the conscious actions of the birds who call it home, having slowly burrowed away the wall’s cement matrix.

After they came back, they approached the new contraption with trepidation (having seen me fiddle with it, they must wonder if it is a trap) with its bright blue and orange newfangled elasticity and stability. They look at it from the grape vine and seem to tease one another by jumping for the feeder to only, at the last minute, catch a ride on a swift invisible current of fresh air. Most just seem content eating the fallen seeds on the balcony floor, not willing to take the risk at the feeder.

Reflecting on their whimsical behaviour makes me wonder if they somehow might acknowledge me for stabilizing the feeder for them. I mean, do birds even have any sense of causality or agency like we humans do, or do they just live each fleeting moment floating on a breeze? If they do, I wonder to what extent they experience joy or happiness that I momentarily solved their hunger dilemma. Are birds conscious in the way we humans understand consciousness? If we follow Thomas Nagel‘s definition of consciousness as related to whether or not it makes sense to think of what it is like to be something, to experience the world, then almost certainly, yes. In other words, we don’t normally consider a rock to be having a subjective experience; it’s just atoms. But, one could easily imagine that a bird’s personal subjective experience feels like something. In this way then, do the birds have internal mental labels for individual humans? Probably.

I’m not a neuroscientist, so if you would permit me to oversimplify for a moment, we might consider a loose definition of happiness as the neurochemical impulse produced by a release of dopamine. Personally, I get a feeling that I would associate to those neurotransmitters akin to “the butterflies” when I discover something new, or realize that, “oh, there’s ice cream for dessert”! Or, even when I have a temporary writer’s block, and finally come up with the best, ahem… word, yes, that’s it! From what I’ve read about this phenomenon, that’s the cause. So, do birds have any such similar feeling?

My intuition, with my lifetime of insatiable curiosity about the natural world, is that evolution would have naturally selected for “good feelings” by birds or humans if it were associated with feeding, and thus, with improved chance of survival. So, my suspicion is that they do, at some level, appreciate the help I gave them if we reduce happiness to activated neurotransmitters in such a way. And, in this way, it is logical to think of birds as conscious sentient creatures not so far removed from us.

Well, after running out of bird seed, we tried to substitute it with a pack of expired buckwheat grains. We filled the feeder up with it and waited to see what would happen. Nothing happened. They didn’t touch it. For 5 months. We thought that the reason for this was that as the spring came, they had plenty of access to food, whether insects or other seeds found around.

But now, they’re back. But the weird thing is that they don’t just perch on the feeder and eat the seeds, they throw them off the feeder to the balcony below, making a huge mess. At first, we thought that they were protesting these bad seeds and just therefore discarding them. But, they do eat them from the balcony, so it’s hard to know exactly why. Maybe, after a few dry weeks and the non-irrigated weedy parts of our garden showing clear signs of suffering by-design, there is less available protein to go around. Not to mention, with summer comes significant competition for the year-round sparrows from other insectivores such as some summer season swallows, swifts, and bats.

Were they really doing what it seemed to us? That is, were they consciously trying to smash the seeds to reveal more of the delicious white starch inside? I suppose they do have some hungry chicks to feed as well at this time of year, so they could be doing that. Interestingly, as we were speculating about this, I looked outside to see that very thing! A female sparrow was feeding two young chicks by chewing up a grain of buckwheat and spitting it in their open mouths. I should note that this seems to differ from the well-known habit of saving food in their bellies only to regurgitate it into their chicks’ waiting mouths. It looked like she would just chew the grain up a bit for them to make it more digestible. In any case, the buckwheat is now gone, and we had a big mess of broken grains (and poop) to clean up again. Small price to pay, I suppose, for the pleasure of being able to observe these modern-day dinosaurs at just a few metres distance.